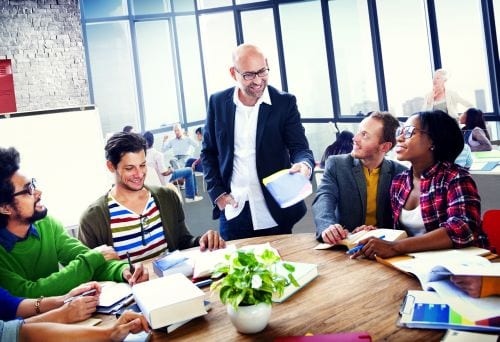 How Reverse Mentoring Programs can Bridge the Technology Divide

As more and more members of the millennial generation enter the workforce to take their place beside the aging baby boomers, a wonderful thing is happening in many cases.

Instead of conflict and competition, there is comradery.

The technology divide is being breached with ease and both generations are benefiting in the growth of skills and confidence in the process.

Technically, the process has been given the name of “reverse mentoring.”

Perhaps Robert De Nero deserves some credit for the trend since his role in The Intern allowed us to see past some stereotypes and realize that seniors could serve as interns just as effectively (or more so) as college graduates.

Others credit Jack Welsh, former chair of General Electric, for making the idea popular, even though the concept has been floating around boardrooms for at least a decade. In the 1990s, Welch realized that he couldn’t possibly stay on top of all the new developments in technology, so he took on young mentors whose job was to keep him advised of what was going on in that field.

So what is reverse mentoring today?

It is a formal or informal pairing of a 55+ worker with a 25+ worker for the purpose of mentoring. The young worker mentors the older worker, not the other way around.

The senior worker, like Welch, gets help with technological challenges from the tech-savvy millennial worker, along with a gust of fresh thinking and attitudinal insight from the younger worker.

But, no mentoring program works well if the mentor doesn’t get something out of the relationship like the mentee does. In this case, the younger worker gains insight into the corporate culture, how it does business and its value system, and often many useful strategies for handling stress and crisis situations.

Not only do both age groups gain new skills, but the practice allows both of them to dispense with the “me versus them” attitude that can keep generations apart, and create more effective teams as organizations around the world become flatter and less hierarchical.

The mentors and mentees don’t have to spend all their working hours together. In fact, improvements in skills and attitudes have been observed in even an hour a week. Much depends on the work circumstances, size of an organization and nature of the industry.

How can you launch an effective reverse mentorship program in your organization?

Generally there are three essential steps to set up the program and ensure that it runs smoothly:

You can incorporate reverse mentorship programs within the framework of your existing corporate mentoring program. It just requires a few small tweaks to make it work.

Don’t spend too much time trying to match workers of similar interests or backgrounds: some of the most dynamic reverse mentoring combos are as different as day and night.