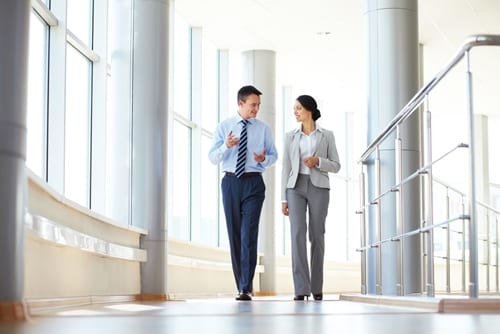 The benefits of regular physical activity cannot be denied – especially in the workplace. Staying in an office for eight hours every day may wreak havoc on one’s physical health, particularly for employees who must remain seated for the duration of the work day.

Managers looking to add a bit of movement to their staff’s daily routine should consider encouraging walking breaks, as these allow workers to get their minds and bodies moving. Some of the nation’s most influential minds – such as Barack Obama and Mark Zuckerberg – are well known for walking during meetings, as they understand the benefits inherent in the practice.

Teaching employees about the benefits of regular wellness – such as through online training software – is a great way to show workers how important physical activity is for healthy minds and bodies.

Walking boosts creativity
Researchers from Stanford University recently conducted a study among nearly 200 students at the institution, discovering that those who participated in walking sessions were much more likely to express creative thinking abilities than those who sat. As part of the trial, participants were asked to conduct a series of creativity tests, including those that examined critical thinking and development capabilities. According to the results, 100 percent of those who walked could come up with well-developed thoughts, while only 50 percent of those who sat could do the same.

“This isn’t to say that every task at work should be done while simultaneously walking, but those that require a fresh perspective or new ideas would benefit from it,” said Marily Oppezzo, a doctoral graduate in educational psychology.

She added that walking may not be the only solution when creating new ideas, but it has been linked to greater cognitive movement and allows workers to release a bit of steam during the day.

Activity increases productivity
A separate study from the University of Minnesota found that in addition to boosting creativity, engaging in this practice may increase productivity as well. According to Avner Ben-Ner, lead author and professor at the Carlson School of Management, participants who walked on the treadmill while completing tasks not only burned more calories, but also finished a greater number of work-related tasks.

“Study volunteers increased their daily activity expenditure by more than 8 percent,” Ben-Ner said, as quoted by a university press release.

While not all offices have access to treadmills, encouraging frequent walking breaks among employees may help spark thinking and foster creation in the workplace.