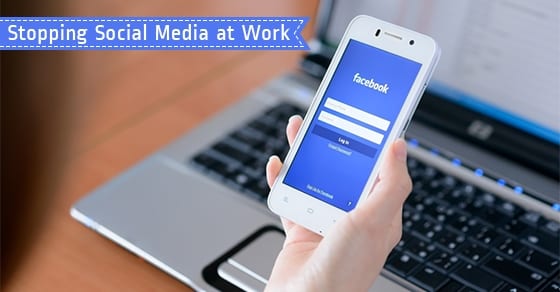 Cutting Down on Social Media Use During Office Hours

We’ve all seen it before. The guy sitting at his desk, phone in hand, swiping away. You approach to find out how his work is coming along. He can’t even make eye contact with you during an important conversation because he’s too busy commenting on his own Facebook status

Unfortunately, this behavior is the norm in today’s social media influenced climate, but it doesn’t have to be the norm in your office.

When we discuss social media during office hours, we are not talking about employee workstation computers. You can install software that blocks all social media sites, keeping your staff from using their company computers to browse Pinterest. However, your employees will still have access to their Facebook, Twitter and other social media platforms on their phones. This is where the problem usually lies.

It will become discouraging and aggravating for employees when employers instate ‘no phone’ rules. It implies a lack of trust and can often be construed as offensive. With that in mind, what can you do other than putting up a sign that says, “NO FACEBOOK ON COMPANY TIME”?

It’s essential to productivity that you find a way to cut down on social media use during office hours.

Remember that you want to enforce the rules without scaring your staff. If you maintain a strict “no social media policy at work” by constantly bombarding your employees with reminders, they will begin to resent you, creating a hostile working environment.

Below are three ways to get you staff to cut down on their social media use during office hours without policing them:

The key here is positive encouragement. Set rules and reward those who follow them, don’t reprimand those who don’t, and your employees will be more inclined to stay off social media during their weekday!