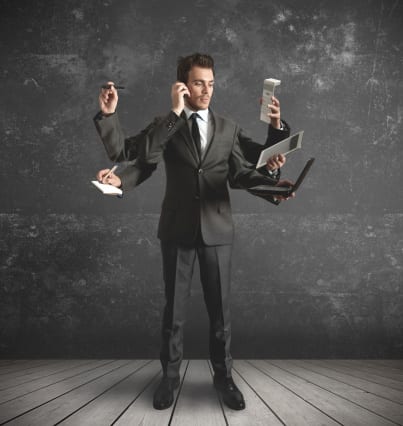 Employee Multitasking Should Be The Exception and Not the Rule

In many organizations, the ability to juggle a range of tasks is regarded as a ‘badge of honour’. Yes, the dynamic executive who has 7 or 8 complicated projects on the go, and who is rushing from A to B is generally revered for their multitasking ability. They are seen to be flexible and adaptable and usually considered to be a key contributor to the organization’s overall agility and ability to respond to a changing marketplace.

The thing is that no one has really asked the question of whether these multi-taskers are actually effective, or whether working in this way is productive compared to uni-tasking. People have just assumed that multitasking is a necessary and progressive way to be working. But, its about time that multitasking was looked at closely as research suggests that multitasking may not be the most effective way for your staff to work.

For example, a Hewlett Packard commissioned study has revealed that employees who are interrupted by email and phone calls experience a 10% reduction in IQ which is double the IQ reduction found in smokers of marijuana.

A third study reported in the Journal of Experimental Psychology has has shown that students who were multitasking were up to 40% slower at solving a problem than students just focusing on one task.

Many organizations are entrenched in the notion that multitasking is the most effective way to work  so HR will need all their powers of persuasion if they are to convince their leaders and managers to change the way they work and to minimize multitasking. You’ll need to make a strong business case and present it to your leaders.

And if you can get them on board, you’ll need to develop awareness within your organization as to the limitations of multitasking and also train managers and staff on how to minimize multitasking.

This training would need to be focused around developing your organization and planning skills within your teams, so that work streams can be planned effectively so staff members get to spend focused, extended periods on one stream of work.

Multitasking Should Be The Exception and Not the Rule

This does not mean that teams and work processes  need to be rigid; there can still be significant flexibility and agility in your processes and multitasking can occur, but it should be the exception to allow multitasking, rather than the rule. Ideally, multitasking should be used sparingly as a flexibility device, but the problem comes when multitasking becomes the norm and masks a disorganized and inefficient organizational structure.

Once again, this represents another great opportunity for the HR and training functions to intervene, improve people processes and make a real impact to the bottom line.